Jose Altuve is what many can be, but refuse to because they buy into the Freak Theory.

The Freak Theory basically dismisses someone’s success when they are different than everyone else.

Those who believe you have to be big to play this game will call Jose Altuve a freak. Just like they called the skinny Tim Lincecum a freak.

They believe Altuve is an exception of the rule of being big, and he is just a freak.

When you look deeper, you will see Altuve is not a freak at all.

You can be small and dominate this game. The stats don’t lie.

This stat will blow your mind. ?

In the big leagues, if you hit the ball 100mph on a launch angle between 10-35 degrees, you have over 70% chance of getting a hit. 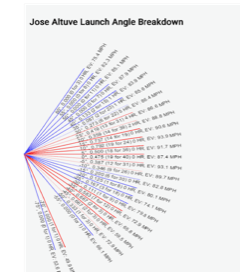 This is not by accident.

✅ Altuve committed himself to being more aggressive.

✅ He also committed himself to getting the ball off the ground.

For those who believe you can’t be small and hit the ball hard, you better think again. ?

With the right goal, and the right mindset, you can do far more than you think you can.