Jose Altuve is what many can be, but refuse to because they buy into the Freak Theory.

The Freak Theory basically dismisses someone’s success when they are different than everyone else.

Those who believe you have to be big to play this game will call Jose Altuve a freak. Just like they called the skinny Tim Lincecum a freak.

They believe Altuve is an exception of the rule of being big, and he is just a freak.

When you look deeper, you will see Altuve is not a freak at all.

Many baseball players can learn from Altuve.

We can be developing a lot more so called “freaks” with the right mindset.

First, I believe the smaller you are, the bigger you have to play.  That’s a fact. 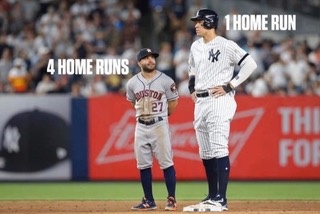 If you have to swing faster, hit harder, throw faster, and be 1000% into being aggressive.

Altuve said himself, his power production went up when he stopped being afraid to strike out.

The Freak Theory is much like those who believe that players are simply born to be a baseball player. Kind of like a prodigy.

They believe in the prodigy concept.

He estimated he took millions of swings as a kid. Millions. Jose Altuve is no different. 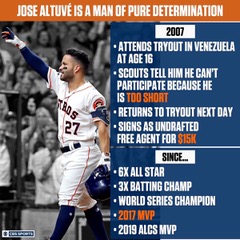 ? He speaks of practicing with his dad, and they only had 1 ball. Every day he would wait for his dad to come home so they can go practice. They had 1 ball. He would hit the ball and then have to go get the ball.

I see kids in America who hit a bucket of baseballs and then rely on mom or dad to go pick up the baseballs.

What those who believe in the prodigy or Freak Theory don’t realize is how hard a guy like Jose Altuve worked to become who he is today.

?He was told after his first pro tryout that he wasn’t good enough.

He still came back again the next day. Persistence.

You see when you combine a super aggressive athlete, with an aggressive mindset, tremendous work ethic, and persistence, you can go a long way in this game.

Yes, you can be 5′ 6″ and be an MVP. Jose Altuve has the market cornered on aggressiveness. He also used his size to fuel his fire and be persistent.