How can a guy be 5 foot 6 inches, and be at the top of MLB and hit with power like Jose Altuve❓

Without aggressiveness, you can never be a great hitter… no matter how big you are.

I know a lot of guys bigger than Jose Altuve and they will never hit like Altuve. 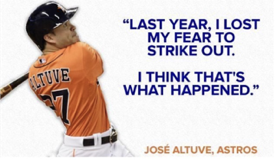 Most players lose aggressiveness when they fail.

Failure is an ego killer. ? Especially in hitting.

Hitting has been called the single hardest thing to do in all of sports.

It is one thing to preach aggressiveness, but the reality is as soon as someone fails, they are more likely to be less aggressive.

Missing or miss hitting the ball is considered failure.

Naturally when someone swings faster, and fails, they will slow down to succeed.

?The fear of looking stupid, the fear of failure is the number 1 constraint in the way of becoming a great hitter.

It’s my job to fuel the fire with what I say, along with the environment I put the hitter into.

Most coaches make the mistake of trying to make hitters perfect at a young age. This usually leads to throwing water on the fire of aggressiveness.

It doesn’t matter what your size really is, you have to be constantly be fueling your fire of aggressiveness.