If You Have 10 Minutes Per Day and A Place Where You Can Swing A Bat, You Must Start Applying...

The Magic Formula for Velocity and Exit Speed

If you want to dramatically increase your pitching velocity and your hitting exit speed then adding the Magic Formula to your training is mandatory!

Watch this short video to learn the Magic Formula:

Pitching Velocity and Hitting Power comes down to two things...

Here’s why Velocity Bats are the easiest Magic Formula Training Tool Ever Invented!

Velocity Bats balance accelerator “speed up” and decelerator “slow down” muscles, so you increase speed and reduce the risk of injury at the same time.

Most players make the mistake of only training muscles that accelerate the body. Yet little or no time is spent addressing the decelerator muscles, the muscles that slow down the body. This leaves a void. No matter how strong the “speed up”  muscles are, if they’re not balanced with “slow down” muscles, increased speed is impossible without risk of injury. The brain’s own self-protecting mechanism will stop any action that could lead to injury. As a result, body and swing speed is inhibited.

However, if the body can improve it’s BALANCED strength, the brain will kick in and allow for faster motion without fear of injury.

You’ll swing the Velocity Bats so that they activate and strengthen both “speed up” AND “slow down” muscles used in the swing. After rigorous testing of various weights, we calibrated the heavy Velocity Bat to maximize strength without compromising speed.

To do this, athletes swing the light Velocity Bat as fast as they can in various cross-specific ways. This allows the brain to accommodate moving at speeds not possible with a standard bat. Over time, the brain allows an increased limits for speed, firing the nerves faster and moving the bat quicker. This, along with increased balanced strength, translates into faster, sustainable swing speeds without additional “effort”.

The Velocity Bats Will Increase Your Pitching Velocity and Hitting Exit Speed!

Just pick it up and swing it, following the “done for you” training program. Just like an iPhone, they look real simple, but as you’ve just heard there’s complex science and research behind them.

You’re getting a complete proven and tested program to use.

Just 10 minutes per day, 3 times per week to start to see the dramatic results that Velocity Bats can bring you.

This is the easiest station you’ll ever add to practice, pre-game BP and training sessions. The program is all laid out. There’s not additional instruction needed. Your players can run this station on their own.

Here's What You're Getting:

Tested, Proven, and Safe
“Done For You”
10 Minute Training Program

You don’t even have to think about it. The workout protocol includes techniques and instructions for how to use the bats in conjunction with your regular practice and workout routine. Most users report clear, tangible and often dramatic results in as little as just 4 weeks! 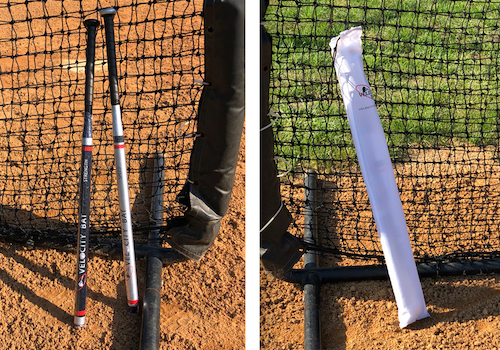 Don't Take My Word For It!

PITCHER WENT FROM 85MPH TO 89MPH

“After participating in the Velocity Bats research protocol, I went from throwing 81mph to reaching 89mph. The shoulder torque that I gained increased my ability to throw harder without adding stress to my arm. The Velocity Bats also brought me a level of power and control over my body that I’d never had before. I was more balanced and more aware of my body. Both of those benefits made velocity and mastery of mechanics so much easier.

“After using the Velocity Bat Program for 6 weeks, I saw my bat speed increase 8mph and my exit velocity increase 4mph.”

“I trained with the Velocity Bats before my senior year in college and increased my ball exit velocity by 5mph! This helped me get noticed by the scouts and get drafted the following Spring in my senior year”

The creator of this program, Charlie Nootbar is a great guy.  I told him the Velocity Bats and The Magic Formula Training program would fly off the shelf at $300.

We got Charlie to agree to let us release a limited number of Velocity Bats sets and Magic Formula programs at a ridiculous discount.

If I’m being frank, I think just security of knowing that the program you’ll be using is proven, tested and safe is worth $300 alone.

What’s the cost of doing it the hard way?

What’s the cost of working hard though a program and getting no results?

What’s the cost of getting injured?

That’s easily worth $299, but you won’t have to invest anything close to that.

We got Charlie to agree to let you have a set of Velocity Bats for just one easy installment of $119.

We negotiate pretty hard for you when we work with our partners. We only work with good people, but even a good person has their limits 😄 We always ask our partners to make 1 sets available because a baseball has 1 stitches and we want to please the baseball gods. ⚾️

Secure your set of Velocity Bats today and put them to the test. Use your Velocity Bats and The Magic Formula program for 30 days risk free. If at the end of 30 days you don’t see dramatic results in your pitching velocity and/or hitting exit speed, simply send them back and we’ll refund every single penny. No questions asked and we’ll part as friends.

You have absolutely nothing to lose and only pitching velocity and hitting exit speed to gain.

Hit the big yellow Add To Cart button below and lock down your discounted set of Velocity Bats before another player comes and scoops them up.  (You’ll choose your size at checkout.)

This sale ends one of two ways:

All 1 Velocity Bat sets sell out or the countdown clock expires.

P.S. Do not wing it and risk your career. Nothing breaks my heart more than a player who misses his potential because they either didn’t have the right program or the right tools. We’ve negotiated this to be an absolute slam-dunk, no-brainer for you.

With the Velocity Bats you have security and confidence that your training program will deliver the results you deserve at a massive discount.

Lock down your set right now while they are still available.

P.P.S. This deep discounted sale ends one of two ways. All 1 sets are secured by players ready to go or the countdown clock expires.

This sale ends one of two ways:

All 1 Velocity Bat sets sell out or the countdown clock expires.