FREE DVD! REVEALS THE SECRETS TO DOMINATING TOURNAMENTS THIS SEASON!

Get Mentally Tough And Ready To Dominate Without Having To Constantly Pump Yourself Up or Stoop To Cheesy Motivational Tactics!

Imagine a being a player that has nerves of steel under the pressure of baseball's toughest tournament situations. 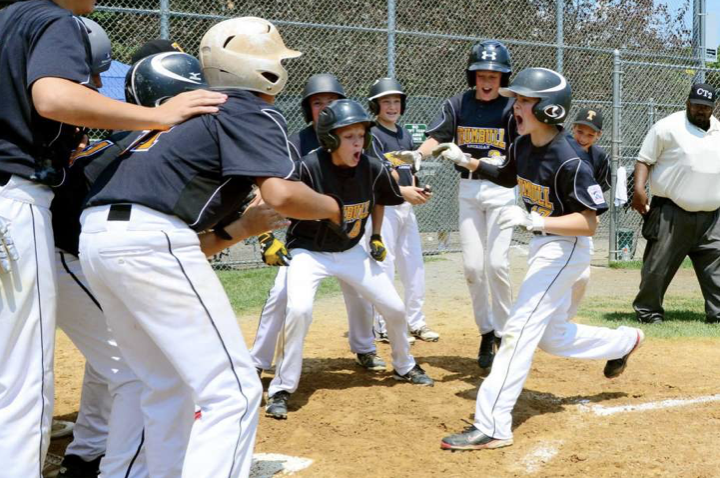 Imagine being a player that puts fear into the hearts of their opponents the second they see you on the line up card.

Imagine being a player so tough that he’s respected by other coaches as a player that’s tough to beat and can’t be rattled.

Now imagine being the player who’s known as a clutch tournament performer by teammates and coaches.

Tournament baseball is no joke.

The talent level is off the charts.

To play tournament baseball your game has to be tight and your skills have to be sharp.

But, let’s face it, even the most talented players are not immune to cracking under a little pressure.

We’ve seen it happen to the best players.

Thoughts inside their head start swirling.

The next things you know, a talented player can find himself going from the G.O.A.T. to the goat.

A player with all the physical tools becomes neutralized if he can’t keep his head about him.

All the practice time, lessons and clinics goes down the drain if a player can’t control his emotions when it matters most.

After all, aren't the big moments what you train for?

But, in the bottom of the 9th, we all know that talent goes out the window and it’s the player that has a relaxed, focused, intensity that wins.

Everyone agrees on the importance of mental toughness, but c’mon.. outside of a few cliche pump-up speeches and motivational quotes, not many players have plan.

How about this for a plan:

“The mental skills you need to gain a competitive advantage!”

Do what Aaron Judge did… 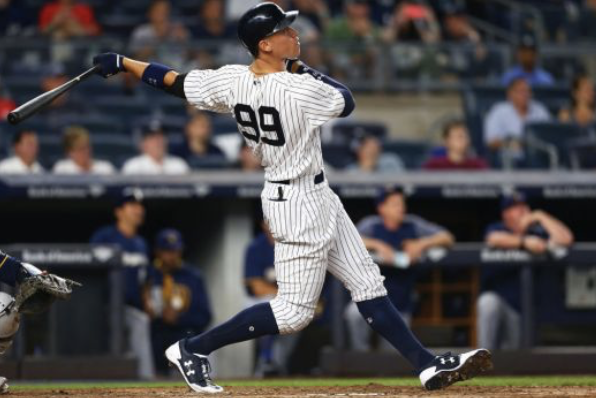 “Aaron Judge credits his patience at the plate and offensive approach to a book he read his senior year at Fresno State by Tom Hanson!” -Quoted from WFAN Radio

Talented kids are mis-labeled as mentally tough because they’re just bigger, faster and stronger and that helps them perform at a high level early in their career. 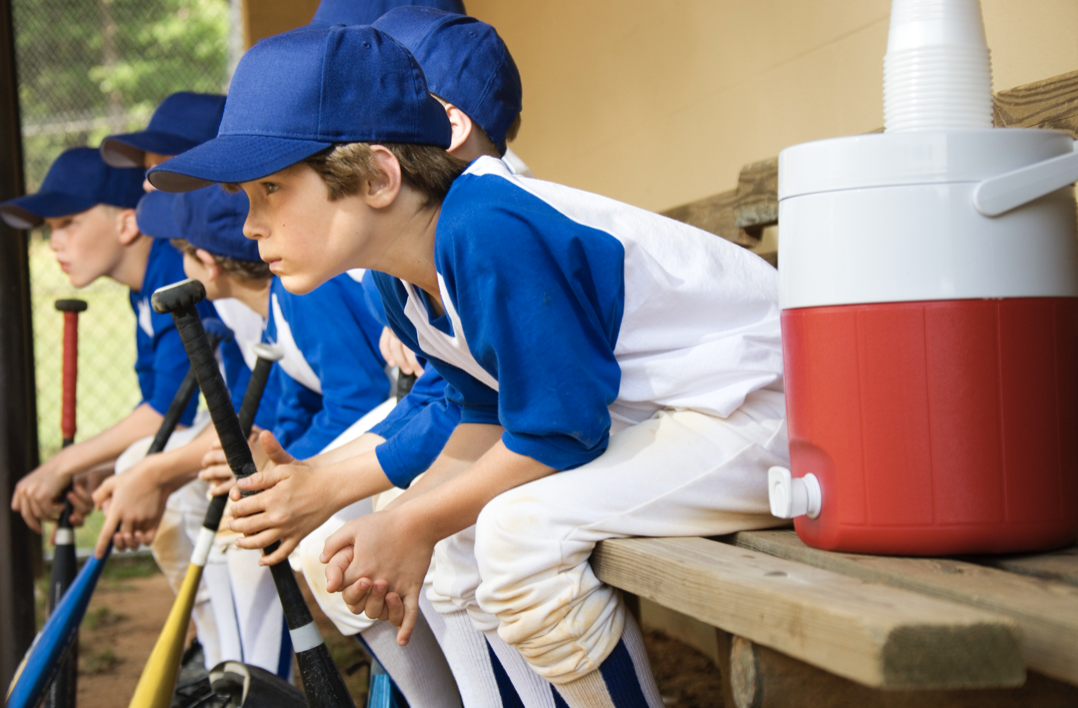 That’s until they come face to face with a player equally as talented and with all things being equal, it comes down to who’s mentally tougher

For talented players, you can continue to pretend there's not a massive weakness in your game and wait till a time when it gets exploited. It always reveals itself at the worst time usually when it means the most.

For kids who were not “born with it”, this is your opportunity to level the playing field.

Put Baseball’s Top Mental Game Coach To Work For You!

Aaron Judge and Joe Maddon aren’t the only ones that have Dr. Tom Hanson in their corner.

You can have him in your corner, too.

We’ve got something awesome for you:

Dr. Hanson was hired by an elite travel team to prepare them mentally for an upcoming Cooperstown tournament.

This is not fluff or theory. This is hard hitting, take it to the field, tournament tested mental toughness tactics.

These tactics are plug and play. They have to be. A player has to be able to take them right into a game to perform his best. There’s not a lot of time to figure stuff out.

This is a jam packed, fast paced program. Dr. Hanson preps this team for Tournament Domination in less than 90 minutes flat.

YOU’LL BE A NEW PLAYER BY YOUR
NEXT TOURNAMENT!

You can put these tournament-tested mental toughness tactics to work for you today.

Imagine stepping on to the field at your next tournament laser focused, intense, but calm and relaxed. Think Mariano Rivera.

Your teammates won’t recognize the new you, but they will respect and depend on you when they see how you handle pressure situations.

Imagine how your role on the team will shift when your coaches see you calm, cool and focused in the toughest situations when everyone else is biting their nails.

Heck, you may even get nickname like “ICE MAN” or “JOHNNY CLUTCH.”  🙂 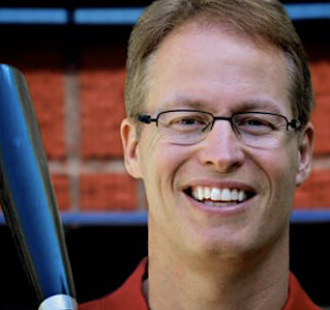 He’s the author of mental toughness classics Play Big and Heads Up Baseball.

“Here’s My Problem with This Program”

Here’s my problem with your program…  On one hand I think the program is outstanding and is exactly what is needed for my team.

I have many boys who take things very seriously, they think that because they are good that they should hit every pitch, make every play and get out every batter. They struggle when things do not go well and actually compound the errors.

On the other hand, my competitive side says that I do not want to share this process with other coaches that we might compete with. I am more than happy (10 out of 10) to do it with friends, parents and non competing coaches.

In the long run, I guess I will just have to use my emotional intelligence and think of the greater good and say that I would recommend this to everyone!

“SEE THE RESULTS ON THE FIELD”

The fun thing is once you have worked with it and have confidence yourself and see the results on the field yourself… you recommend the program to others and you get the look like “why would I need that?” or “that’s too weird” you just smile and realize the gain you got and the loss to those that won’t try it!

I find the smart coaches take to it right away and enjoy the edge it gives them to have a proven mental game system.

YOURS FREE! (for now)

Because we know that mental toughness is the missing link for so many players, we’re doing something crazy. We’re sending you this DVD for FREE. Just pitch in for the shipping.

This DVD will be available after this promotion. It will go in our catalog for $99.

So, you’ll always be able to get it. It just won’t be FREE, like it is now.

Just pitch in for shipping and it’s yours FREE! No strings attached. No additional payments.

Get your hands on this DVD while it’s still FREE and we still have inventory.

This will sell out.

If we do have extras, they will go into our catalog at full retail price.

Get yours now before it’s too late and you’ve missed out on the chance of a lifetime to put the biggest advantage in the game to work for you…FREE! 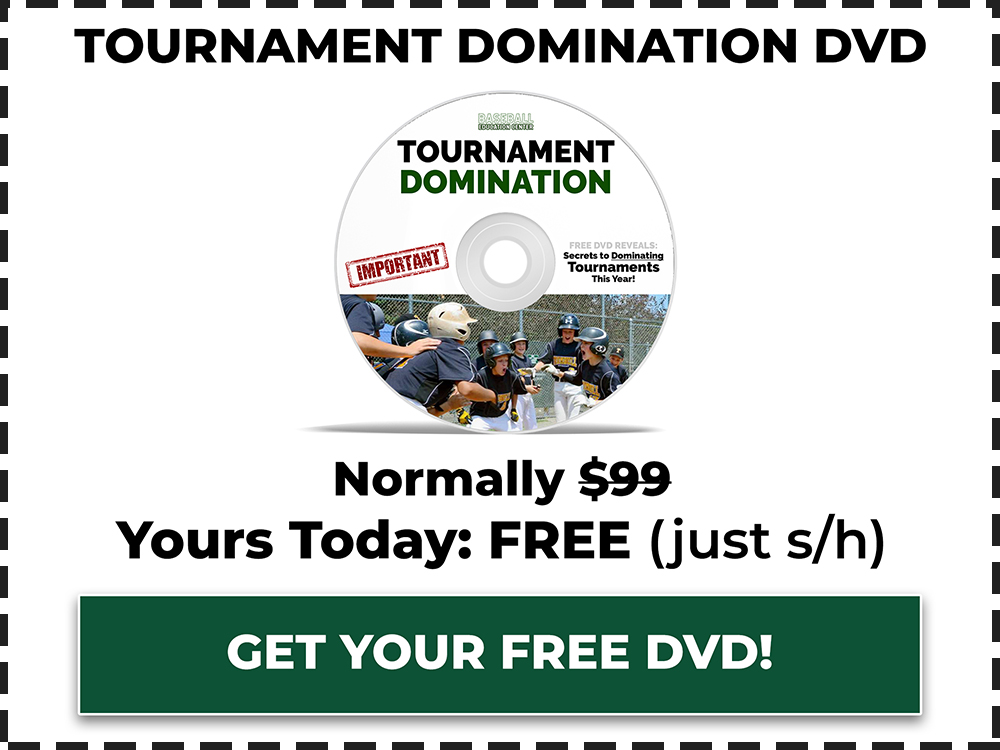 P.S. Failed The Test! Remember being in school when a teacher handed out tests and you looked down at the first few questions and it felt like someone punched you in the gut because you just realized you did not prepare properly for what is on the test.

Do you want your son to run out on the field in a clutch situation and have the feeling of "Oh No! I’m not ready for this moment?"

Choking in clutch situations can have a catastrophic effect on a player's phyche.

On the other hand, a player coming up clutch once can completely change his mindset for the rest of his career.

It’s tough to think about your son choking on the field, believe me, I’d love it if we didn’t put kids in these situations, but we do and that’s not going to change.

So, if you’re going into battle, I want to make sure you’re armed.

That’s why we're bringing you the Tournament Domination DVD FREE!