WARNING: The Hitting World Is Changing.
Don’t Let Your Son Be Left Behind!

Mastering Exit Velocity & Launch Angle Transforms Your Son Into An

If You’re Willing To Tinker With A Few New Drills, Then You’ll Discover The Source Of Real Hitting Power That Guarantees Success..
Even If You’re 5 Foot Nothing and Weigh 70lbs Soaking Wet!

At this very moment your son is competing with hundreds and thousands, maybe even millions of hitters who are competing for a few coveted spots at the High School, College and Professional Level.

Hitters today are wasting valuable practice time on outdated drills and useless hitting lessons. Your son might be one of those players.

Maybe you’ve tried to bring your son to the local celebrity instructor or his travel team coach to work on his hitting with little success...

Scouts, recruiters and coaches are not going to be impressed with aluminum bat home runs and inflated travel team batting averages anymore. Those days are gone.

Your son will be evaluated on Exit Velocity and Launch Angle... and you can’t fake them!

If a Major League Player hits the ball with an exit speed of 104 mph, stats say he’ll hit 561.

If that same Major League hitter hits the ball with 110mph exit speed, he’s going to hit a WHOPPING .761!!

Of course not, but consider this:

Let’s say your son hit a ground ball with a 55mph exit speed and the shortstop moves to his left, fields the ball and throws you out at first.

The next time up you hit the ball to the same spot in the infield, but you hit it 65mph. Now, you have a base hit, instead of a ground out.

Here’s a few more stats to that will blow you away: 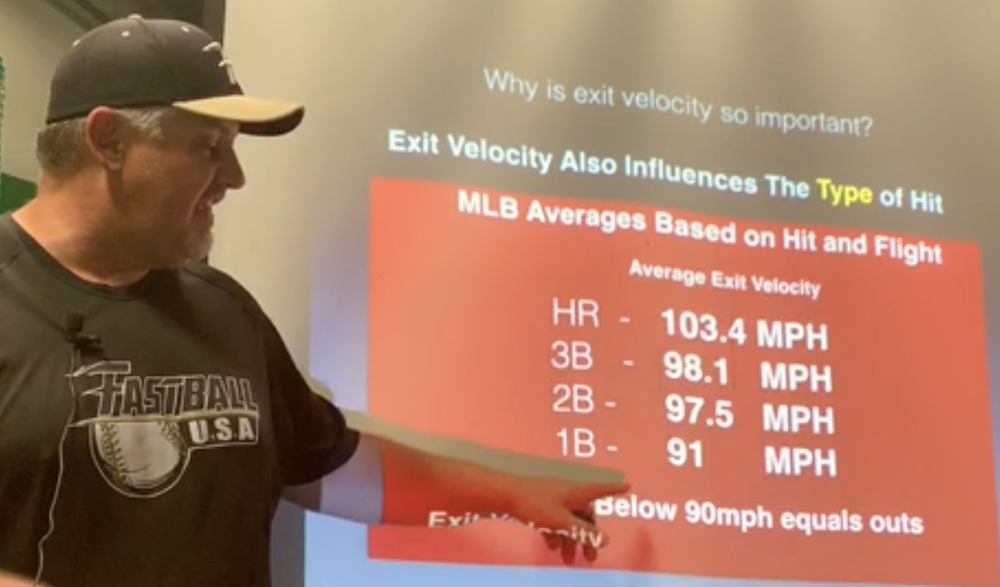 The Exit Velocity On Triples = 98mph

The Exit Velocity On Doubles = 97mph

IS YOUR SON A WORM KILLER?

Check out this graphic of Bryce Harper’s launch angle... This is every ball he hit last year. 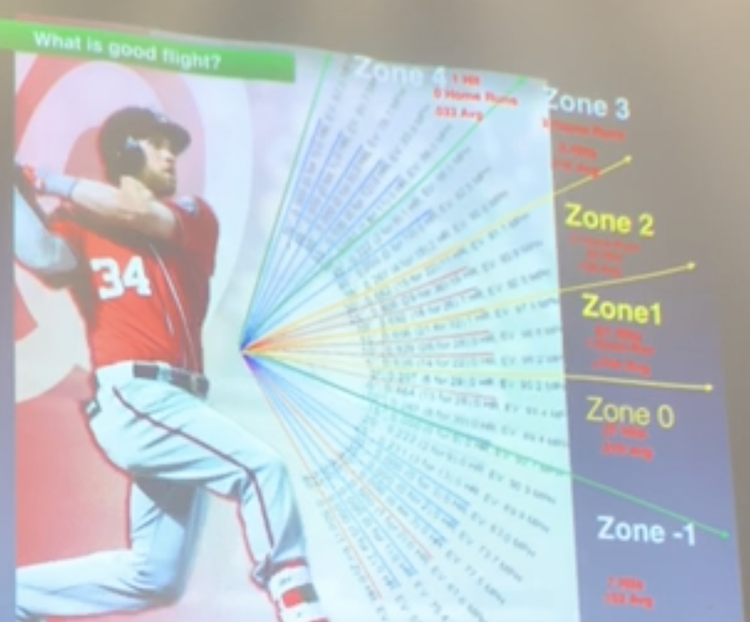 Now, you don’t have the technology to do this kind of detailed work. All you have to do is break it down into zones.

If he hits in those zones, he’s going to have a greater chance of hitting double, triples, and home runs!

Like I said before, your son probably can’t hit the ball with 95mph exit velocity, but he can train to hit the ball as hard as he can AND HE CAN START TO TRAIN TO HIT AT A 25 DEGREE LAUNCH ANGLE!

These are the exact drills we use at Fastball USA to manufacture 90mph+ hitters like they’re coming off an assembly line.  The same drills we use to practically force hitters to hit at that “magic” 25-degree launch angle.

Not only are these drills 100% safe for hitters of all ages, but I’d go as far as to say they’re NECESSARY…

That’s IF you want your son to be able to compete in today’s (or tomorrow’s) game.

With these drills, your son can quickly move toward that magic 95/25, no matter what his current age or level.

And I’ve compiled them into a powerful new video training:

Let’s get one thing straight.

If you’re looking for pretty…

This video is nothing fancy.

This is pure, raw, unfiltered information that transforms hitters.

In fact, my partners and I agreed this information is so valuable (and so needed) that we’ve deliberately kept production costs low so that we can offer it to you at the best possible price.

I’ll be blunt. Your travel team coach might know all the buzzwords and they sound good when they shout them out at a game, but ask him to really teach you how to improve Exit Velo and Launch Angle and you’ll hear crickets. There’s just no other way you could easily get your hands on this critical information.

These drills are kindergarten simple.  You don’t need any kind of fancy equipment and you can do most of them in your garage or backyard.  You don’t need coaching experience, or to learn a bunch of biomechanics or complicated scientific jargon.

All you need are the drills I show you in the video.

In fact, with these drills, not only will you have an edge over almost any other coach out there…BUT…

Your son will start feeling it during the very first session!

(And you’ll see the results as soon as his next at bat.)

YES, YOUR SON CAN BE
AN EXPLOSIVE IMPACT HITTER

How would you like to rewind the clock and have your son hit every ball he hit last year 10mph harder? Now just think about how much better he’ll do this year once you’re armed with the tools to see that 10mph increase?

Imagine what your son’s career would look like if he improved his batting average by .100 points?

How much more confident will your son be at the plate knowing exactly what angle he has to hit the ball to improve his chances of getting a hit?

How about the look on his coaches and teammates faces when the ball starts flying off his bat like it was launched out of a missile silo?

(I was a scout for The Seattle Mariners for 16 years before that.)

9x my students have been drafted, and many of them are playing at the highest levels of collegiate baseball.

My book Creating The 100mph Hitter was the first on the topic.  Mark my words, a few years from now, most books on hitting will be about exit velocity and launch angle!

In this exclusive video, I’m pulling back the curtains for the first time and revealing my go-to drills to develop exit velocity and launch angle.

You’ll be getting very specific, very detailed secrets I use to bring the best out players of all ranks and ages.

HERE’S WHAT YOU’LL LEARN IN THE VIDEO:
RAPIDLY BOOST HIS BATTING AVERAGE!

THERE’S A POINT IN THEIR SWING AT WHICH THE GAME’S BEST HITTERS LOOK ALMOST IDENTICAL.

I can’t overstate how big this is!  Many of the game’s most prolific hitters have used different styles.  But when you break it down, there are certain principles at work in EVERY world-class swing.  These are the mechanics that go into producing exit velocity and launch angle.  Could your son do this one specific thing that all great players do?  With a little practice, why not?

This’ll be a huge A-HA moment for you.

And it’ll take so much stress off you as a parent, trying to “correct” your son’s swing.

Simply use the catching glove drill (and others) the way we show you – which isn’t hard – and watch your son almost instantly get more hits!

And I’m just getting warmed up.

Here are a few MORE secrets you’ll find in the video:

…and much, much more!

That’s just a small taste of what you’ll learn in the video.

This stuff is no joke.

It’s some of the most powerful hitting information on the planet (that not 1 in a 1,000 coaches knows). 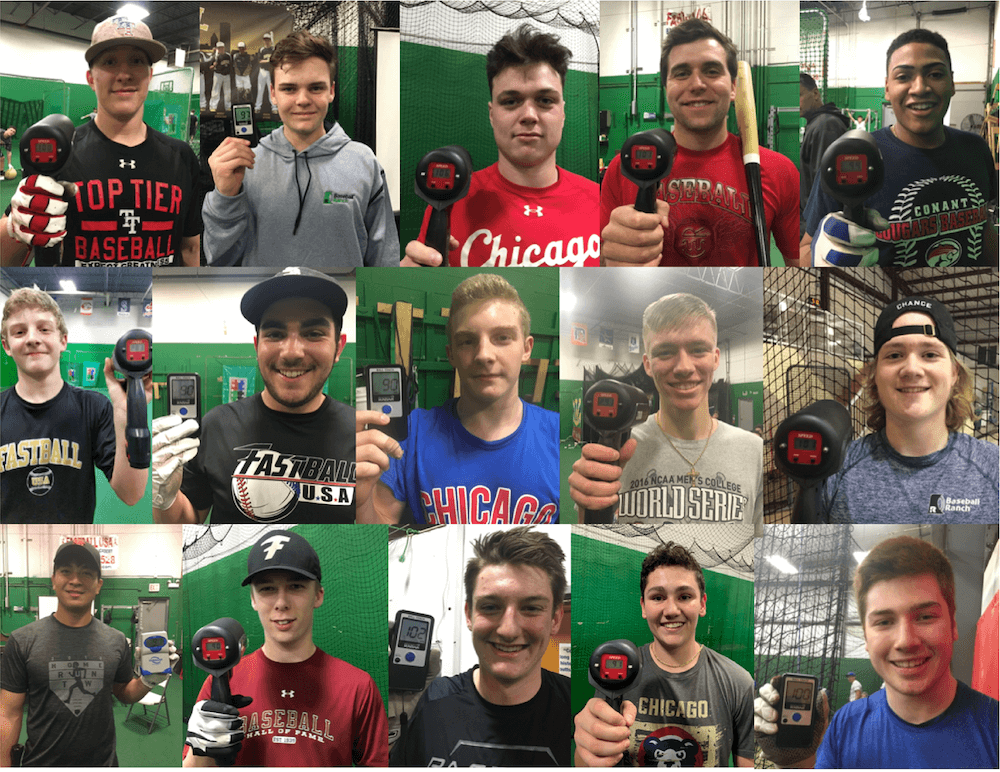 Nothing is held back in this tell-all video.

I’ve gone the distance to bring you the best drills I have personally tested, refined, and proven with our athletes here at Fastball USA.

All your son needs is the drills and information in this video and he’ll be a different hitter this year.

(...and you’ll be a more relaxed parent just knowing he has them!)

In a moment, I’ll tell you how to get instant access to the video at today’s special introductory price.

MY SYSTEM HELPS HITTERS
ALL OVER THE WORLD

Players from Taiwan, The Philippines, Australia, Canada, The Netherlands, and all over the USA have each paid thousands to travel to one of our camps and learn these secrets.

How much is your son’s baseball destiny worth to you?

Because nothing less is at stake.

His playing time, playing on the team he wants to, advancing through the sport and reaching his potential – let alone his enjoyment of the game, because getting better makes playing more fun – all hinge on his ability to produce Exit Velocity & Launch Angle.

What would not knowing how to create exit velocity and launch angle cost him?

Is it some…or all of the above?

Let’s make sure he never finds out.

Exit Velocity & Launch Angle retails for $97.  But if you buy it today, I’ll give you instant access at the special introductory price of just $27.  That’s a mere fraction of what our private students and camp attendees have paid for this kind of training... and less than what you might spend in one month on gas, just driving him to games.

But I Must Hear From You Today...

Like I said, this is a special introductory offer.

My partners have made it clear: depending on how well the launch goes, they want to raise the price fairly quickly.

Maybe even by tonight.

So don’t miss it!

And if you have any hesitation left (you shouldn’t…my hitters would tell you this deal is pretty much a no-brainer at the regular price…let alone the special price I’m giving you today), I’ll go you one further.

If you get the video today, you can learn these secrets at absolutely no risk with…

I’m willing to bet you’ll find this to be some of the best information on hitting anywhere.

That’s why I’m putting my money at risk, so you don’t have to.

Use the drills with your son for a full 60 days, and if he doesn’t feel more confident, stronger and isn’t hitting much harder and farther… if he doesn’t add at least 5-10mph or more to his exit velocity and immediately show more production at the plate…if his coaches and teammates aren’t amazed at the difference in watching him hit… …simply send us an email, and we’ll send you a full refund right away, no questions asked.

That way there’s zero risk to you.

You’ve got nothing to lose, and your son has everything to gain.

Now is the time to act before the season gets underway. Don’t be late to the dance. 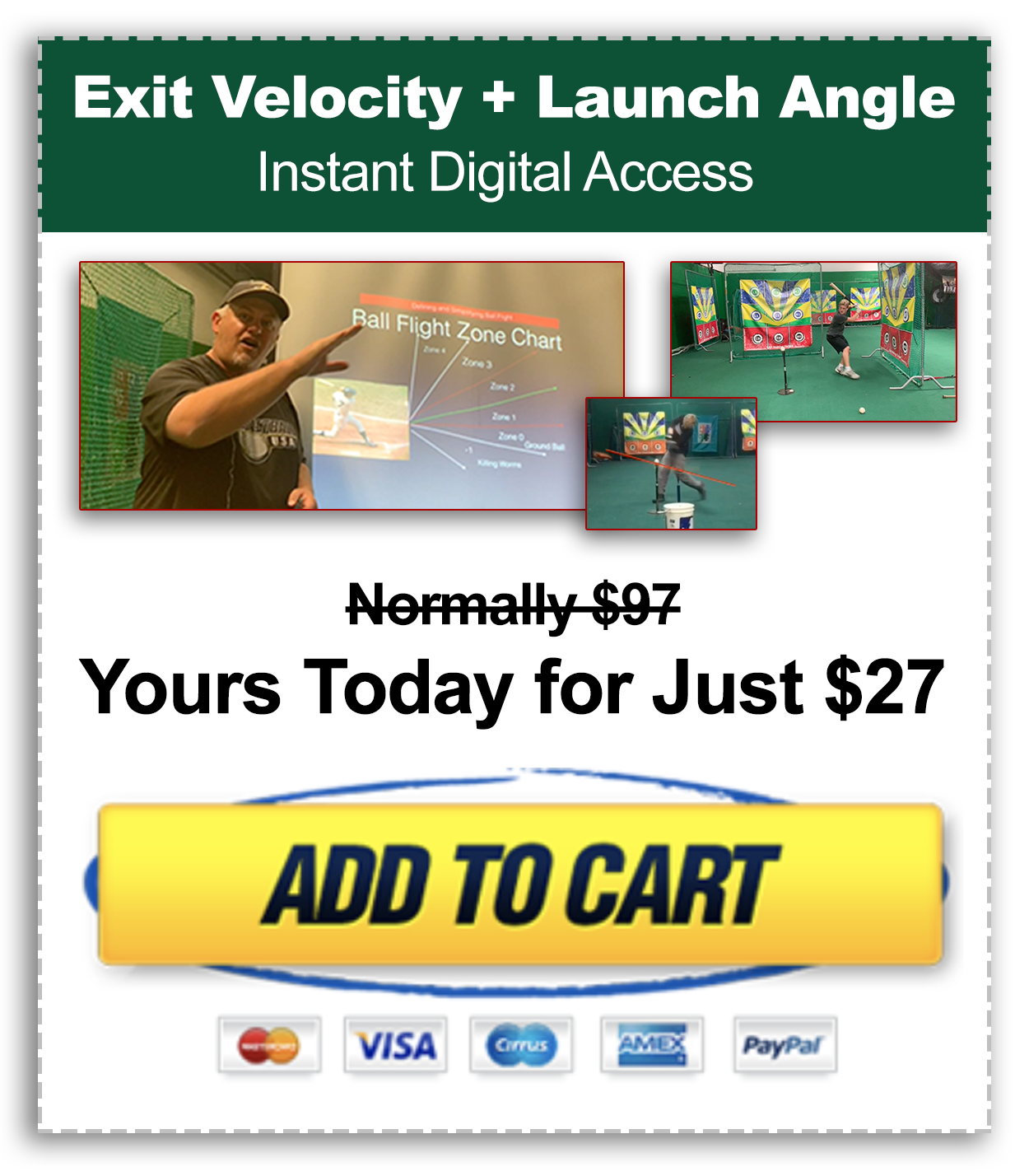 Yours in baseball,
Mike Ryan

P.S. Soon there’s going to be no way around tracking and improving launch angle and exit velocity numbers.  If you don’t start tracking them now, your son will be behind when it comes time to improve them.

P.P.S. If you do start to track, measure and improve them now, you’ll have a head start on every other player your son will be competing with for attention from coaches, a spot on the team or playing time.

Click the button below to get instant access to my Exit Velocity & Launch Angle secrets (and bonuses) for just $27: